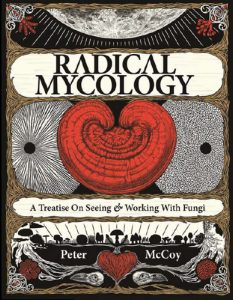 ‘All life is connected. This is the primary lesson that fungi teach’, so begins Radical Mycology – A Treatise on Seeing and Working with Fungi.

A hefty 700-page compendium by self-taught mycologist, Peter McCoy, the book represents his work over the last decade since founding Radical Mycology, a grassroots network of fungus enthusiasts who share skills for cultivating mushrooms and working with fungi for ecological and societal resilience. A self published effort, this broad-reaching account encompasses the science, history and culture of fungi in a very accessible and readable style.

The last great big book on fungi that I read was Moore, Robson and Trinci’s encyclopedic resource, the comprehensive academic textbook on fungal biology, 21st Century Guidebook to Fungi (2011). Radical Mycology, however, is a very different book. While it also covers aspects of fungal biology and Moore’s influence on McCoy is evident, Radical Mycology focusses largely on human relationships with fungi and how to actively develop and maximise the use of fungi as food, medicine and in mycoremediation. The book also spans other areas including mushroom identification, ethnomycology, lichenology, the ecological significance of fungi, conservation, psychedelic fungi and the influence of fungi on human cultures including, unusually, a specific chapter on women’s knowledge of fungi.

I’ve not met McCoy but reading his words one gets the impression of a passionate, enthusiastic and insightful thinker. Not only is his book extremely informative, McCoy delivers comprehensive information in an appealingly personal and quirky style, moving across scales of time and space and often drawing on human analogies, thus making abstract concepts accessible. Radical Mycology feels like the culmination of a life’s work, all the more astounding given McCoy is barely 30, incredibly young to prepare such a comprehensive tome.

The book’s breadth of themes is its main strength. Much of it is based on McCoy’s own experience, experimentation and research, providing the reader with many different access points to the world of fungi. McCoy lays down his concerns right from the start and rather than adopting the more usual taxonomic approach, he begins with mycelium as a literal and metaphorical framework for thinking about fungi, nature and society. He questions language, concepts and the ways in which knowledge is generated in relation to fungi, using the notion of mycelial connectivity as a model for augmenting scientific knowledge with insights from alternative sources. McCoy describes mycology as a ‘neglected megascience’, expressing his concern about the loss of traditional whole-organism mycology and other areas in the biological sciences for both the scientific world and the non-scientific community.

In the preface, McCoy identifies his influences as coming from artists and poets, ecologists, permaculturalists and bioremediators, natural medicine practitioners, fermenters and herbalists, independent media makers and social critics among others, giving the reader a sense for the tone and shape of the book to follow. The book’s twelve chapters are encompassed within the sections:

These section titles lay the foundation for how McCoy approaches fungi and within the first paragraphs he advocates the significance of the interconnectivity of fungi and their uniqueness, especially in fulfilling ecological roles not provided by other organisms, particularly their role in building soil. I especially liked his emphasis on soil, a theme too often overlooked in other books on fungi.

McCoy has an extensive understanding of scientific, social and political aspects of fungi. He writes technically without being encumbered by jargon. Following a brief overview of the significance of fungi, he launches straight into their taxonomy and biology with a brief account of spores and other microscopic structures and fungal reproduction.

Almost half of the book is then devoted to mushroom cultivation, beginning with basic principles, followed by detailed instructions, methods, recipes, charts and advice on sourcing and recycling materials and supported by extensive appendices.

Radical Mycology is not so much a book for mycologists. It is more an instructive guide for mushroom cultivators and a broad range of fungus enthusiasts. While accessible to novices, it also includes a level of technical detail for those with a stronger grasp of fungi and their biology and chemistry. It is very much a homegrown, low-tech, low-budget manual with a strong permacultural influence. Cultivators will find the detailed practical information on preparation and techniques especially useful.

Being so far-reaching, Radical Mycology is likely to appeal to a broad audience, the trade-off being that inevitably some sections will be of greater interest than others. As I am not a mushroom cultivator, I enjoyed those chapters with an ecological, conservation and philosophical focus, particularly the second last chapter, ‘The Mycelium is the Message’ where McCoy’s writing echoes that of mycologist, Alan Rayner, who reflects on the parallels between mycelial and human social networks. McCoy develops interesting arguments in linking mycelial networks with systems theory, political movements and social justice.

In the final chapter, ‘Mycognosis’, McCoy explores the history of the use of psychedelic fungi. He offers a sensitive and measured approach, explaining their chemistry, effects and cultural uses and along with guest author Peter Sjöstedt-H, critiques some of the more controversial authors who have written on the subject.

However, more scientifically-oriented readers might, for example, be less inspired by some of the ideas inthe seventh chapter, ‘The Pharmycopeia’, particularly the homeopathic preparations, hermetic philosophy and alchemical and astrological correspondences.

The book is cheap for US$50. If there is another print run, thorough proofing to eradicate the many small typographical errors and repetitions would increase its professionalism. Fungi are such wonderfully evocative and visual organisms and McCoy writes about them with great verve. I therefore thought it was a shame that the quality of the photography and reproduction didn’t match McCoy’s talent as a thinker and writer. However, these are not really criticisms of McCoy, but perhaps more so a reflection of the lack of recognition for fungi and the challenge of finding a major publisher willing to invest in such a tome.

McCoy casts a wide mycelial web and in doing so will certainly attract new fungus advocates. The strongest message McCoy imparts is about how fungi offer a framework for more expansive ways of thinking: ‘challenging us to look beneath the surface, live on the edge, explore the unknown, adapt, respect imperfections and differences, and to look for another way forward’.

Cook, Langdon. The Mushroom Hunters: On the Trail of an Underground America. New York: Ballantine, 2013.

Lowenhaupt Tsing, Anna. The Mushroom at the End of the World: On the Possibility of Life in Capitalist Ruins. Princeton: Princeton University Press, 2015.