Lichens are fantastic examples of nature’s ability to combine in novel ways to exploit environmental conditions. Lichens are unusual in that they are a symbiotic relationship between a fungus and an alga or cyanobacterium, rather than a set of species. They are classified by the fungal partner in this relationship.

How lichens are formed is one of the greatest puzzles in biology. Just as salt is dissimilar to sodium and chlorine, so is lichen dissimilar to the organisms that create it. William Purvis, lichenologist, Natural History Museum, London

There are 3,500 known species of lichenised fungi in Australia spanning all habitats, including the arid interior.

Unlike other fungi, lichens are photosynthetic but only thanks to the photosynthetic properties of the algae or cyanobacteria, and they consequently have a rather different biology and ecology to other larger fungi. Some lichenised fungi, such as Xanthoparmelia semiviridis, Badimiella pteridophila, Heterodea muelleri, Nephroma australe, and Psora decipiens are easy to identify in the field, but the correct identification of most lichens requires laboratory-based methods that may be beyond the resources of some citizen-scientists.

Symbiosis – Lichens, or lichenised fungi, are organisms made up of a fungus and one or more algae or a cyanobacterium in a symbiotic relationship.

The non-fungal partner in these organisms is referred to as a photobiont and is able to manufacture carbohydrates through photosynthesis. The fungus or mycobiont, like all fungal species, must obtain carbon from living matter and ‘harvests’ it from the algae.

The fungus protects the photosynthetic cells in a tissue known as the thallus, anchoring to a substrate, and absorbing water and nutrients. The cyanobacteria or algal cells provide the fungus with carbohydrates from photosynthesis. This symbiotic relationship allows lichens to thrive in inhospitable environments, such as directly on rock.

This is how the Australian National Botanic Gardens explains it:

Lichens possess structures not formed by either of the partners and produce chemicals usually absent when the fungus or the photobiont are cultivated separately and so lichens are more than a sum of their parts. In fact, lichens synthesize over 800 substances, many of them not found elsewhere in nature. Though the fungi that form lichens do not occur in nature as independent organisms, a number of the photobionts can be found in free-living forms. It is possible to separately culture the two partners in the laboratory but it is difficult to resynthesize the lichen. Success has been achieved when the fungus and photobiont are placed under stress (e.g. by reducing water and nutrient levels), suggesting that originally lichen partnerships formed to overcome adversity. [Read more here]

Ancient pioneers – Recognisable fossil records of lichen go back at least 400 million years. Lichen are early colonisers – the first to establish after volcanic eruptions for instance. They provide the early stage of weathering in rocks, slowly breaking down the rock and creating soil. This is done by small filamentous, root-like threads that anchor the lichen to the rock and force their way into interfaces using chemicals that dissolve the rock minerals.

Like fungi they are in all natural environments and in many urban areas although fewer species can tolerate air pollution, particularly sulphur dioxide. Indeed lichens are sometimes used as environmental indicators for pollution monitoring.

There are 3,000 known species of lichen in Australia, about 1,000 of which are endemic.

According to the British Lichen Society:

In the study of lichens, the name and classification belongs to the fungal partner, which in most cases is the dominant member of the association, at least in terms of biomass.

Lichen fungi have evolved independently several times within the mushroom-forming fungi and relatives (the basidiomycetes), but much more commonly, from within the cup fungi (the ascomycetes). About 98% of lichens belong to the cup fungi, and it is these lineages that produce almost all of the familiar and colourful crusts, rosette-forming, foliose (leafy) types, and shrubby or fruticose lichens that many people recognise. Probably more than ten distinct major lineages of fungi within the ascomycetes are lichenised. Current estimates suggest that one fifth of all known fungi and half of all ascomycetes are lichenised, with about 28,000 species worldwide.

…. Left unchallenged, undisturbed and with a suitably long-lived substrate, it is quite common for a lichen to have a lifespan of several centuries; in fact a certain arctic specimen of a crustose lichen, Rhisocarpon geographicum, was found to be about 9000 years old!

Ecological importance – Lichens are able to fix atmospheric nitrogen which becomes available through leaching or decay and can be a significant source of nitrogen for plants. Lichens also absorb mineral nutrients, are a source of food for animals, provide habitat for invertebrates and can create soil crusts which control erosion and protect soil structures in semi-arid and arid lands. They can withstand prolonged drying, can capture moisture from dew and fog and resume activity rapidly after wetting

The interior of lichens is often richly infused with complex secondary fungal chemicals found nowhere else in nature, and these compounds are likely to play a role in protection from UV radiation, desiccation, and grazing by herbivores as well.

Lichens also have great aesthetic value and some are brilliantly coloured. See here for A conservation overview of Australian non-marine lichens, bryophytes, algae and fungi, Australian Government Dept of the Environment & Energy.

Forms – The three most common lichen forms are: 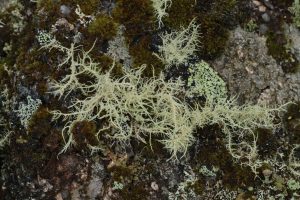 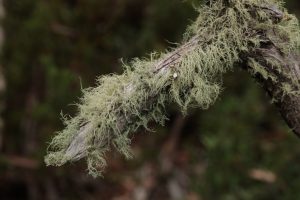 Fruticose – Shrubby with round branches with the fungal layer on the outside, algal layer within, beard-like or tangled, attached to the substrate by an anchor at their base. The rest of the body is free and either erect or pendulous, slow growing. 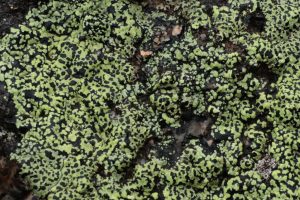 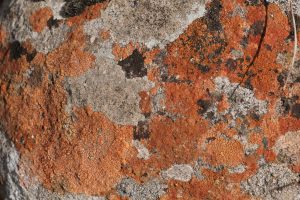 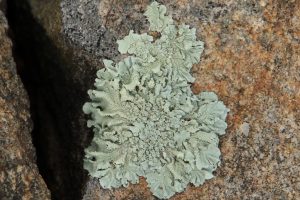 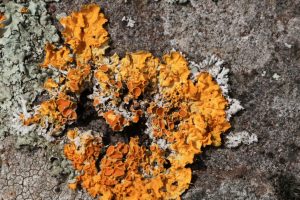 Foliose – Leafy, a sandwich of fungal layer with an algal mat in the middle, folded with distinct edges that are not adhered to the substrate, circular, flat sheets of tissue, often leaf-like in shape, has small rootlets called rhizines for attachment to the substrate.