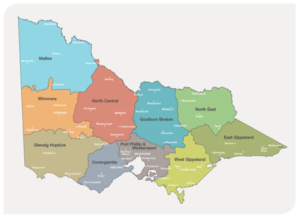 We were delighted to receive a Victorian Government Biodiversity On-ground Action grant of $50,000 in late 2017 for a project until 2020 which will focus on fungi in eight Victorian Catchment Management areas over the next two years. These are:

We are (for updates and downloads of kits):

Those data records will help clarify distribution, species abundance and pinpoint areas needing further research. Once the project is underway, we will encourage groups to share their knowledge with others in their community.

Hypocreopsis amplectens – Tea-tree Fingers is a rare fungus and the only fungus listed under the Victorian Flora & Fauna Guarantee Act 1988 and is considered “vulnerable”. It was discovered in 1992 at Nyora, Vic. during a survey of plants.

Recent surveys suggest it has disappeared from one of the three known locations on the Mornington Peninsula and Gippsland, Victoria. We were funded by the Victorian State Government in 2016 to find out where it lives and to map the species so that an action plan can be developed for its survival and recovery.  It may also warrant inclusion on national threat status lists in Australia and New Zealand.

In July 2017 the largest known population of Tea-tree Fingers was discovered at Wanderslore sanctuary at Launching Place, Vic by the Field Naturalists Club of Victoria. As reported in the FNCV newsletter:

The discovery is noteworthy for several reasons, including:

We hope to undertake population studies and continue to work towards better conservation of Tea-tree Fingers, which has also been found at:

The habitat for Tea-tree Fingers is long-unburnt, heathy woodland with stands of tea tree, banksia and melaleuca species which have reached a height in excess of 3 meters.

If you are interested in contributing to this project, you can:

And if you think you have seen Tea-tree Fingers but are unsure, please email us at: fungimapconservation@gmail.com.

See here for the latest update.