By Susie Webster and Pat Leonard

I was going for a nice walk in Landsborough, Queensland, back in late July and not really expecting to see any fungi let alone any interesting ones. Not a metre from the railway track, I noticed a nice looking puckered Bolete or so I thought… a bit late for boletes but anything is a bonus.

So I took a couple of ap 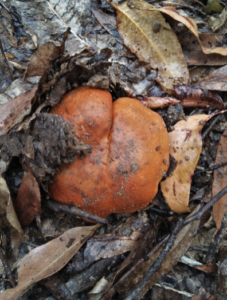 propriate photos, from the top and of the general environment, then I dug it up. Well, not a bolete at all but what appears to be a Cortinarius sp. I also took a photo of the gills and the stem. With its red brick brown cap, possibly a little sun bleached but the stipe is full with a basal bulb and a small radicating root. So, I collected this one and continued up to Pat Leonard’s place and gave it to him to see if we could get some DNA for sampling. 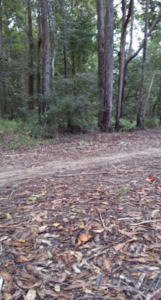 Well, Corts are not Pat’s nor my favourite but this was a little different and therefore should have been easy to identify. The swollen base places the fungus in the subgenus Phlegmacium. Cheryl Grgurinovic’s ‘The Larger Fungi of South Australia’ offers a key to Cortinarius subgenus Phlegmacium (page 151) and this collection keyed out to Cortinarius bambrus. If he was right then it had not been found since 23 July 1927, this is 94 years ago, so technically now extinct. However, with a little more investigation we found one more reference in South Australia collected on 20th July 2002 in Cleland Conservation Park, Mt Lofty and supplied as “In soil, under {Eucalyptus camaldulensis} and {E. baxteri}. Eucalypt woodland. Caespitose, subcaespitose in soil” and stored in the South Australian Herbarium. Found and identified by Pam Catcheside (a well respected mycologist). So this is only three finds and the first and the last found on exactly the same day 94 years apart!

There are two records in South Australia and one a very long way away in South East Queensland. 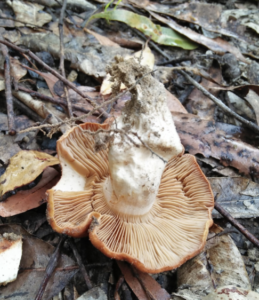 lose enough to 2000kms between the three finds and it was only known from its type specimen until recently.

Next, the DNA work up arrived back and guess what…??? It says it is 99.05% Cortinarius eucaeruleus mainly reported from Sweden, Norway and Estonia. But the matched sequence is for a specimen collected in Turkey! Our sequence does not match that of a specimen collected in Germany and sequenced at the well-respected University of Tuebingen laboratories. With only three known specimens from Australia and only two viable for DNA work, what do we do next?

Well the Northern hemisphere description for Germany https://www.123pilzsuche.de/daten/details/HellstieligerViolettKlumpfuss.htm is very similar, certainly in my opinion. But the cap colour in the photos threw both Pat and myself, it is purple. This brings me to an uncollected find some 20m 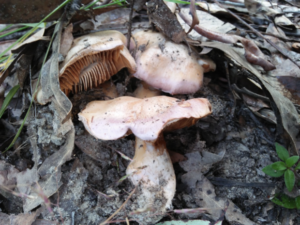 etres away but I decided that one Cort was quite enough so I took a photograph and left them. The tricky thing is, they were a little crowded cluster, and when I moved the top cap the one underneath where it was in the shadow was purplish and hinted more at the European photos than the fresh one I collected. And, Pam Catcheside had commented that her 2002 collection was ceaspitose (clustered). Pat now believes this purple tinted Cort may be different but without the spores we cannot either confirm nor deny its species. I should have collected it. However, does science believe in coincidences?

So now we have ourselves a little project, could everyone please keep watch for these curious looking Corts, especially in July around the 20th to 23rd, put it in your calendars for a reminder. Please also take and include all the four photos in this article as they are helpful in identification. This will help us research if they are just overlooked (just another brown Cort) or are they genuinely very rare. We would also like to collect some DNA to confirm if they are the same as in the Turkish or the Northern Hemisphere’s Cortinarius eucaeruleus. Please contact fungimap[at]gmail.com if you find anything resembling this species!