The Waite Conservation Reserve, known to be the largest and best surviving Grey Box Grassy Woodland in South Australia, opened its gates for a fungi foray at the Springwood Park side on 23 July 2022. Thirty-five Friends of Waite CR (FWCR) who expressed enthusiasm for learning about fungi, spotting, identifying, and recording them in iNaturalist, joined this foray organised by Peter Bird, President of the FWCR, and Anita Xian, Convenor of the Adelaide Fungal Studies Group (AFSG). The foray was led by Teresa Lebel, mycologist from the SA Herbarium and member of the AFSG.

A leisurely walk through the grassy woodland allowed us to learn about our fungi findings in both undisturbed and disturbed habitats. The undisturbed habitat which is characterised by diverse native plant species such as sundews (Drosera whittakeri, D. planchonii), rock fern (Cheilanthes austrotenuifolia), blue pincushion (Brunonia australis), layers of leaf litter on the ground and less large woody debris, had many more ectomycorrhizal species and a greater diversity of saprophytic fungi in comparison to the disturbed habitat with mainly native grasses and large woody debris. Some ectomycorrhizal species found on the foray day were Amanita sp., Amanita xanthocephala, several Cortinarius species including C. erythraeus, Russula ?lenkunya, Laccaria lateritia group, and Phaeohelotium baileyanum. Saprophytic fungi such as Aleurina ferruginea, Bovista sp., Coltricia australica, Entoloma sp., Galerina marginata, Pholiota communis, Psilocybe subaeruginosa and a few other gilled fungi (order Agaricales) occurred on the ground whereas fruitbodies of Phaeotrametes decipiens were present on an old dead Drooping Sheoak (Allocasuarina verticillata) trunk. 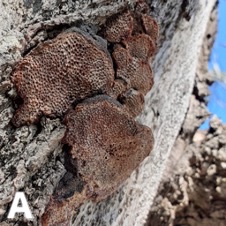 The find of Phaeotrametes decipiens was the highlight of the foray. Some old brown hoof-like fruitbodies with very large pores resembling honeycomb were noticed along a dead trunk 2m above the ground (A). This species is usually restricted to wood, and grows on the branches and trunks of living and dead trees.

Recent rains and warmer weather had stimulated growth of new fruitbodies (B, C). Their upper surface looks velvety or hairy, often irregular and has a rich reddish-brown colour. Pores (1 pore/mm, C) are off white to pale brown and they are lined with spore producing cells. 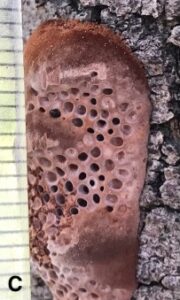 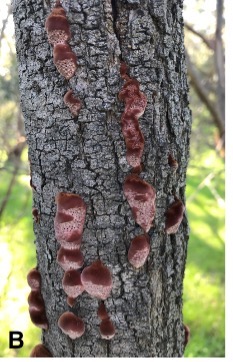 At least two tree trunks in the small area of the reserve are colonised with P. decipiens and probably a few more trees will be colonised by next year due to the airborne dispersal of P. decipiens spores and the spread of pieces of decayed wood with mycelia.

This was the first record of P. decipiens at the Waite CR and its eighth record in South Australia based on Atlas of Living Australia data.

The Friends of Waite CR and other fungi enthusiasts are continuing to photograph and submit records to the ‘Fungimap Australia’ iNaturalist project and consequently to the Waite Conservation Reserve, South Australia project. Their observations help to produce a clearer picture of the diversity and distribution of fungi at the reserve and their population dynamics over time.

Until next year, a new fungi season and another fungi foray, I will keep my eyes on conspicuous and hidden fungal gems at the Waite CR.

Tijana Petrovic is the recipient of a Fungimap Research Grant 2022 for her project “Diversity of macrofungi in the Waite nature reserves (Adelaide, SA)”.