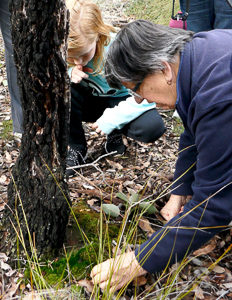 Fungimap took part in the Fantastic Fungi Festival in Manjimup in the south west of WA, organised by the Warren Catchment Council, held from 16 June to 14 July 2018

The first event Fungmap was involved in, was Forest, Fungi and Fauna for families held at Perup in the Tone-Perup Nature Reserve, a Reserve set up to protect endangered mammals, inland of Manjimup.

Dr Adrian Wayne of the State Government Department of Biodiversity Conservation and Attractions (DBCA) talked about small Australian endangered mammals, their decline over the whole of Australia over the last 100 years and why the area surrounding Perup in the SW of WA has become their last refuge in Australia due to certain poisonous plants which the native mammals evolved to survive with. Adrian also talked about what is being done to protect these endangered mammals now.

Fungimap President Roz Hart gave an entertaining display explaining why fungi are vital food for these small marsupials, as Australian native truffles are their essential food. The marsupials detect the partially or fully buried truffle fruiting bodies by smell, use their digging claws to unearth them and eat them. During this process they dig and turn over amazing quantities of leaf litter and soil. The truffle spores are excreted in their poo, and with a boost from poo nutrients, germinate into fungi mycelium. This mycelium partners with the native plants assisting their germination and strong continued growth. Once conditions are suitable, the mycelium produces fruiting bodies ie truffles, mammals seek out and eat them and the cycle continues to the benefit of all: mammals, fungi and plants as well as insects and birds, in fact, that’s how nature works.

After a delicious local lunch organised by the Warren Catchment Council (WCC), Katrina Syme, Roz Hart and Sapphire McMullan Fisher of Fungimap organised the 50 adults and children into smaller groups and led them into the bush, showing them how and where to look for fungi and teaching them about those that they found. A highlight of the fungi foray was the discovery by Sapphire’s group of Tricholomopsis rutilans, (Plums and Custard), which has been rarely seen in WA with only 8 records in the ALA so far. Thirty different fungi species were seen on the afternoon foray

As part of the Fungi Festival, the WCC together with the Manjimup Photography Club organised both a fungi photo competition and a Fungi picture exhibition by local and excellent photographers Grant and Sandi Hetherington. The winners of this were announced and awarded their prizes at the evening opening of the Exhibition. Lee Fontanini took home the coveted camera lens prize. 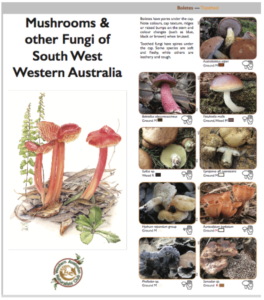 The first Fungi of the South West WA pocket Guide – to fungi of SW WA was launched at this event by Roz Hart in her capacity as Fungimap President.

Fungimap and the WA Naturalists Club ran an all day workshop on Fungi in Pemberton which 40 people attended. The Warren Catchment Council organised the venue, foray bus and lunch while WA Naturalists’ and Fungimap provided the Fungi leaders for 5 groups at the foray at Big Brook Dam close by, where 38 species found , some of which were brought back for teaching purposes in the afternoon.

After lunch, Sapphire gave a wonderfully illustrated presentation “Fabulous Fungi – what they do for our bushlands”, including information on how fungi are the hidden links in our healthy bushlands, how fungi partner plants, recycle nutrients, provide food and habitat for animals and why not all fungal diseases are bad.

Following the presentation, some of the fungi gathered on the foray (including some native truffles) were sorted into their morphological groups and their roles in ecosystem functioning were explained. Participants examined the fungi, and talked to the fungi leaders asking questions and learning more about their interests in fungi.

Fungimap provided very relevant posters with information about recognising the difference between the local native fungus Amanita xanthocephala and the introduced European species Amanita muscaria which is currently invading Manjimup and surrounding areas. It was first observed a few years ago and is quickly establishing itself both in the forest and in the towns, and being a very pretty fungus, it’s important for local people to know that it’s an invading weed fungus. We photographed one just outside our accommodation and were horrified to see the Manjimup Council has just planted an avenue of one of its exotic hosts, Oaks along the main street! That will really help it along. 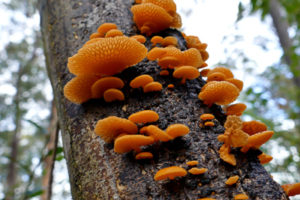 Sadly we also found a lot of Favolaschia calocera, another weed fungus, this one from Madagascar via New Zealand, in the forest where we forayed. For many of us it is the first time we have seen this weed fungus. It would be good if Fungimap could produce another poster to warn of this invader that we can look out for and avoid spreading.

The ten Forgotten Flora posters about environment, edibility, importance of fungi were highly visible and read with interest by many who visited the photographic Exhibition and viewed the photo competition. This display was available for viewing for a week in the Manjimup library and Art Gallery

Continuing education of Fungi leaders was an important aspect of the event. On Friday afternoon at the Diamond tree and Sunday morning near Eastborne Rd, both sites in the Karri forest not far from Manjimup, the WA Naturalists’ Club leaders together with Katie and Sapphire forayed together taking photos and sharing knowledge of the fabulous fungi we found in the local Karri forest, some of which were not easily identified. The use of i-naturalist was demonstrated and its value discussed. This was a very important part of the weekend for the leaders who have not had much opportunity lately to share knowledge. This was greatly appreciated. A spreadsheet list of the fungi has been compiled for enabling sharing of information and photos.

This first Manjimup Fungi Festival was a declared a resounding success with all events supported and appreciated. Thanks to Lee Fontanini of the WCC for obtaining the Grant that allowed all the great ideas to come together and actually happen.